The Apprentice remains a hugely popular show, even 14 series in. But the validity of the show as a true representation of how we do business today often falls into question. That’s why weve invited real business people to give their take on each episode, pulling out the key lessons and making for tangible, valuable advice for any business owner. Episode 3 of the current series aired last night, inviting viewers to watch as the two teams (newly reshuffled to remove the gender split) came up with new doughnut flavours and attempted to sell them to both commercial and consumer buyers. The premise? A fairly straightforward “most profit wins”. So what did we learn?

Leadership skills: Front or back?

Early foreshadowing in the episode appeared to pitch Tom Bunday – owner of a tree surgery firm – as a weaker leader ready for a boardroom battering should his team fail to deliver. It was his style of leadership that came under fire, with Karen Brady, Sugar’s trusted assistant and eyes on the ground? failing to be impressed by the Southampton born entrepreneur’s democratic approach. as a leader, you need to lead from the front, she said. But he’s leading from the back!. An unfair assessment, suggests James Calder, CEO of Distinct Recruitment which itself employs a team of professionals and places candidates into new roles every day based on their skill sets and the job requirements. tom’s leadership style came under scrutiny during this week’s show. As Karen said, he rules by democracy and he’s leading from the back. “As far as team leadership is concerned, there are different styles out there and I actually felt the democratic approach was to be applauded, rather than picked out as a negative. “it’s important to recognise and utilise people’s skills. Identification of those skills is a key part of being a leader, but so too is empowering colleagues to identify their own value and contribute in the ways in which they are comfortable and then enable them to fulfil their aspirations. “In the context of The Apprentice, Tom should have positioned himself more as a leader in the traditional sense, but my instinct suggests that it is actually Tom’s ability to bring his team along on his journey that ultimately saved him in the boardroom. __________________________________________________________________________________

The proof is in the pudding almost

This being a food-based challenge, last night’s audience was no doubt primed for some classic Apprentice faux pas, where poor taste choices and bad allocation of ingredients led to low margins and sub-par products. And the audience would not have been left disappointed! We saw the usual mistakes being made in the kitchen, with QA going out the window in favour of speed and the decision to use sriracha hot sauce on a sweet doughnut causing confusion (and much discomfort) amongst teams and consumers alike. But, argued Gavin Dow of coffee brand Coffee Central, it’s not a case of playing it safe, but of finding the right balance. 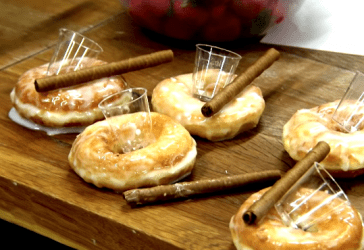 this week’s task was a challenging one to say the least. Success in the food business is a balance between giving people what they want, and opening their eyes to something new.