What are the most successful Kickstarter campaigns ever?

Kickstarter launched in 2009 and provided small businesses and budding entrepreneurs with a great platform for raising funding. In its short history, the Brooklyn-based company founded by Perry Chen, Yancey Strickler, and Charles Adler has received over $4 billion and helped fund more than 445,000 projects. Some of these have gone on to be hugely successful. Betway?s Online Casino recently conducted research into which start-up campaigns on Kickstarter have been the most successful. There are some astonishing figures regard the funding certain businesses received. The research looked into four different areas:?the most funded campaign, the biggest success story, the most funded campaign yet to materialise, and the most backers for a single campaign.

Source: Betway Oculus Rift is one of the best-known players in the emerging virtual reality market. The $2 billion purchase of the company in 2014 helped it gain attention in mainstream markets. This all came about after Oculus VR started a Kickstarter campaign in 2012, which raised $2.4 million from 9,522 backers. This total massively eclipsed the original target of $250,000 and helped bring the hardware to Mark Zuckerberg?s attention.

Source: Betway The most funded campaign in Kickstarter history was the Pebble watch, a little-known product which has now been discontinued. This was because it was purchased by Fitbit for $23 million in 2016. When the smartwatch began its campaign it had a target of ?100,000 but went on to raise over $10 million. The company then launched a second campaign in 2015 and once again exceeded expectations. The Pebble Time watch achieved its goal of $500,000 in seventeen minutes and made $1 million in 49 minutes. The technology designed by this start-up went on to be used in Fitbit watches and Pebble watches were eventually phased out.

Source: Betway Star Citizen is the most funded Kickstarter campaign that is yet to materialise. 2.3 million people pledged money to the “epic space adventure”?from Cloud Imperium Games, which has around $128 million of backing to date from various different sources. The deadline for the game?s release has been postponed on numerous occasions and there is no sign as to when the finished product might be ready. 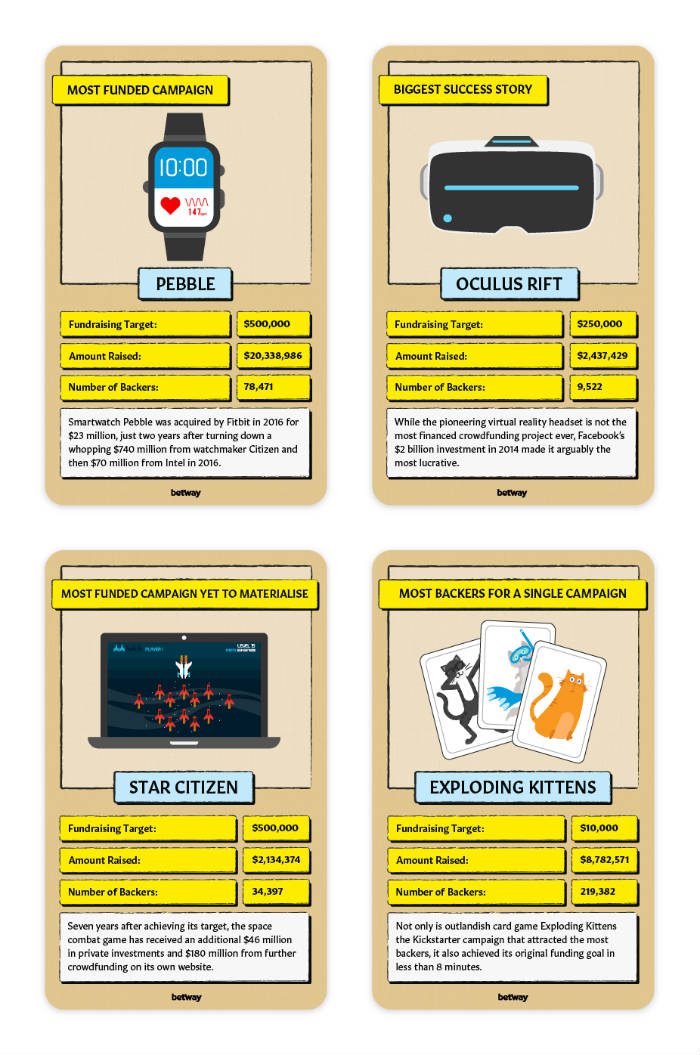 Source: Betway The final Kickstarter campaign on Betway?s list was Exploding Kittens, which claims the award for having the most backers in the platform?s history. The card game has been described as a “highly strategic kitty-powered version of Russian Roulette”?and had a funding goal of $10,000 when it launched in 2015. It went on to attract over 219,000 backers and raised a total of nearly $8.8 million. Part of the reason for its success was the fact that it engaged with the community and invited backers to complete amusing tasks. These success stories should fill young entrepreneurs with hope that their start-up could also find such success. There are lessons to be learnt from these businesses, who found that their niche ideas appealed to large numbers of backers.